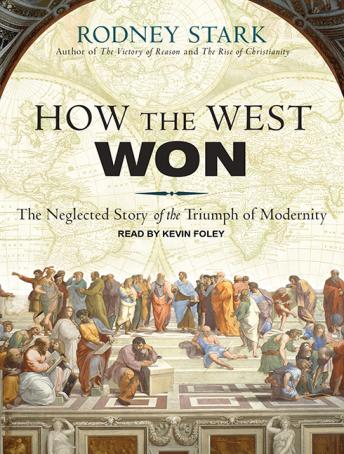 How the West Won: The Neglected Story of the Triumph of Modernity

Modernity developed only in the West-in Europe and North America. Nowhere else did science and democracy arise; nowhere else was slavery outlawed. Only Westerners invented chimneys, musical scores, telescopes, eyeglasses, pianos, electric lights, aspirin, and soap. The question is, why? Unfortunately, that question has become so politically incorrect that most scholars avoid it. But acclaimed author Rodney Stark provides the answers in this sweeping new look at Western civilization.

How the West Won demonstrates the primacy of uniquely Western ideas-among them the belief in free will, the commitment to the pursuit of knowledge, the notion that the universe functions according to rational rules that can be discovered, and the emphasis on human freedom and secure property rights. How the West Won displays Stark's gifts for lively narrative history and making the latest scholarship accessible to all. This bold, insightful book will force you to rethink your understanding of the West and the birth of modernity-and to recognize that Western civilization really has set itself apart from other cultures.

How the West Won: The Neglected Story of the Triumph of Modernity

This title is due for release on June 27, 2014
We'll send you an email as soon as it is available!