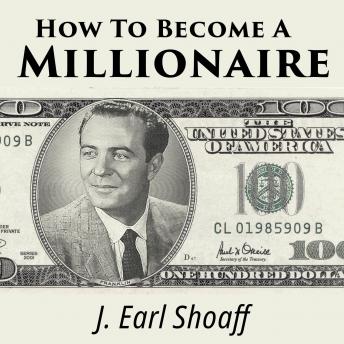 How to Become a Millionaire

J. Earl Shoaff, Jim Rohn's personal mentor, gives the presentation that changed Jim's life! Anyone who ever heard Jim Rohn speak, knows the impact that Earl Shoaff had on his life. Here is a transcription of the recording of the presentation by Earl Shoaff that changed Jim's life and provides the secrets to his success. By the time Jim Rohn reached the age of 25, he was married, had a family and worked as a stock clerk at Sears earning $57 a week take home pay. Finding himself falling behind on his bills, and with nothing in the bank to fall back on, he knew he wanted more out of life but had no idea on how to make it happen. Then something happened to him that changed his life forever and gave him the answers he was looking for. The same good fortune that happened to Jim all those years ago is about to happen to you! One of Jim's friends told him about a man he had gone to work for. This man was very rich and wise. He had an incredible philosophy about life and he was easy to talk to. His friend talked about this man so much that Jim's curiosity got the better of him and he went to hear what this man had to say. Jim walked into the room and took a seat. He really didn't know what to expect, but he kept an open mind and listened intently as the speaker opened his eyes to a world he never knew existed. A world where you could truly be anything you wanted to be and you could have anything you wanted to have! Jim said of the experience, 'To this day, I can't tell you exactly what he said, I just knew that I would have given anything to be like him.' Then, standing at the back of the room, he got an idea. He thought that, somehow, if he could just get around this man, maybe he could learn the secrets of wealth and happiness.