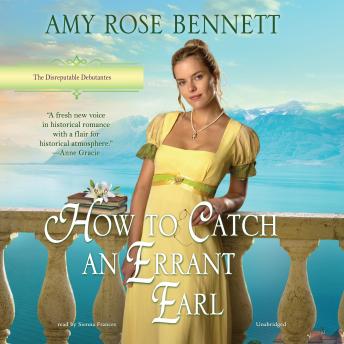 How to Catch an Errant Earl

#2 of The Disreputable Debutantes Series

A young debutante makes a hasty exit from London only to create new headlines on the Continent.

After being expelled from a young ladies’ academy, a disgraced Miss Arabella Jardine is whisked away to the Continent until the controversy in London subsides. However, it doesn’t take long for Arabella to shock her family all over again when an encounter in Switzerland with the irresistible rakehell-in-exile Earl of Langdale leads to a compromising situation. Despite his wicked reputation, Lord Langdale is the sort of man she has dreamed of marrying.

When Gabriel Holmes-Fitzgerald is caught in flagrante delicto with the apparently prim and proper Miss Arabella Jardine, he’s obliged to offer for the young lady’s hand. Unprincipled cad that he is, Gabriel is no stranger to scandal. He’ll do the right thing and wed Arabella, although he secretly despairs his tainted soul will corrupt and ultimately destroy her.

When Arabella’s life is unexpectedly threatened by an unscrupulous enemy from the past, one thing becomes crystal clear to Gabriel: the worst torment of all will be losing the woman he loves. And he would do anything, even sell his soul to the Devil himself, to save her.