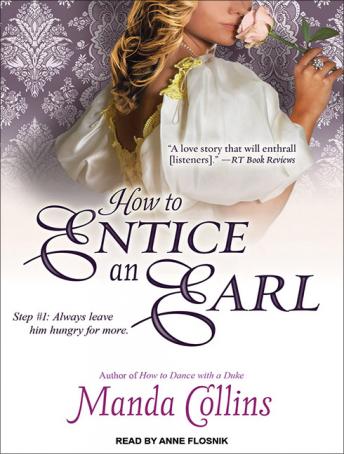 How to Entice an Earl

Lady Madeline Essex is the last of the unwed 'ducklings' in her family-and by far the most outspoken. But when she boldly enters London's most notorious gaming house in search of fodder for her novel, even her sharp tongue can't save her from the horrible crime she stumbles upon there. As luck would have it, first on the scene is the last man she wants to see her vulnerable. The one man who could tempt her heart . . .Christian Monteith, the new Earl of Gresham, isn't much for card rooms and gaming halls. But as a favor to his former commanding officer, he's investigating a gamester for espionage on the night that Maddie ventures in, looking more enticing than he's ever seen her. Suddenly, his feelings for his friend aren't so friendly anymore. And when her curiosity brings the impetuous novelist to the attention of a madman, Christian will stop at nothing to protect her-from a sinister plot that is far more dangerous than any stolen kiss.

How to Entice an Earl

This title is due for release on January 29, 2013
We'll send you an email as soon as it is available!