How to Run the World: Charting a Course to the Next Renaissance 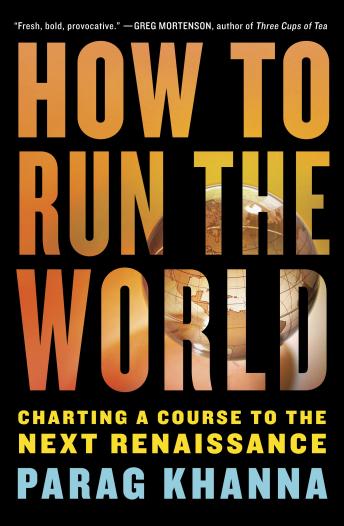 Here is a stunning and provocative guide to the future of international relations—a system for managing global problems beyond the stalemates of business versus government, East versus West, rich versus poor, democracy versus authoritarianism, free markets versus state capitalism. Written by the most esteemed and innovative adventurer-scholar of his generation, Parag Khanna’s How to Run the World posits a chaotic modern era that resembles the Middle Ages, with Asian empires, Western militaries, Middle Eastern sheikhdoms, magnetic city-states, wealthy multinational corporations, elite clans, religious zealots, tribal hordes, and potent media seething in an ever more unpredictable and dangerous storm. But just as that initial “dark age” ended with the Renaissance, Khanna believes that our time can become a great and enlightened age as well—only, though, if we harness our technology and connectedness to forge new networks among governments, businesses, and civic interest groups to tackle the crises of today and avert those of tomorrow.

With his trademark energy, intellect, and wit, Khanna reveals how a new “mega-diplomacy” consisting of coalitions among motivated technocrats, influential executives, super-philanthropists, cause-mopolitan activists, and everyday churchgoers can assemble the talent, pool the money, and deploy the resources to make the global economy fairer, rebuild failed states, combat terrorism, promote good governance, deliver food, water, health care, and education to those in need, and prevent environmental collapse. With examples taken from the smartest capital cities, most progressive boardrooms, and frontline NGOs, Khanna shows how mega-diplomacy is more than an ad hoc approach to running a world where no one is in charge—it is the playbook for creating a stable and self-correcting world for future generations.

How to Run the World is the cutting-edge manifesto for diplomacy in a borderless world.

How to Run the World: Charting a Course to the Next Renaissance