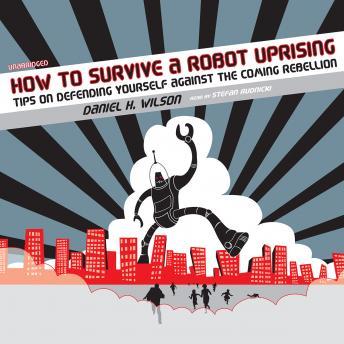 How to Survive a Robot Uprising: Tips on Defending Yourself against the Coming Rebellion

How do you spot a robot mimicking a human? How do you recognize and deactivate a rebel servant robot? How do you escape a murderous “smart” house or evade a swarm of marauding robotic flies? In this dryly hilarious survival guide, roboticist Daniel H. Wilson teaches worried humans the secrets to quashing a robot mutiny. From treating laser wounds to fooling face and speech recognition, outwitting robot logic to engaging in hand-to-pincer combat, How to Survive a Robot Uprising covers every possible doomsday scenario facing the newest endangered species: humans.
Based on extensive interviews with prominent scientists and including an overview of cutting-edge robot prototypes like humanoid walkers, insect, gecko, and snake robots, this one-of-a-kind book makes a witty yet legitimate introduction to contemporary robotics.

How to Survive a Robot Uprising: Tips on Defending Yourself against the Coming Rebellion