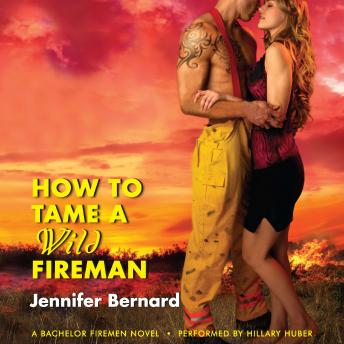 How to Tame a Wild Fireman: A Bachelor Firemen Novel

The Bachelor Firemen of San Gabriel have a rebel among them, and there's only one woman who can put his flames out.

Firefighter Patrick "Psycho" Callahan earns his nickname every day. Fast, fit, and a furious worker, he thrives on the danger which helps him forget a near-tragedy that changed his life forever. But when his off-duty carousing gets out of hand, Patrick is sent back to Loveless, Nevada, where the wildfire threatening his hometown has nothing on sizzling Dr. Lara Nelson.

Lara would rather be thought of as the physician who returned to Loveless than as the misfit brought up at a hippie New Age commune. But right now she's focused on the job at hand, patching up injured firemen . . . until the past hits her in the hard-muscled, blue-eyed form of Patrick Callahan. Now, the embers of their decade-old attraction have ignited into a full-on inferno, as the bad-boy firefighter and the good doctor take a walk on the wild side they'll never forget.

How to Tame a Wild Fireman: A Bachelor Firemen Novel