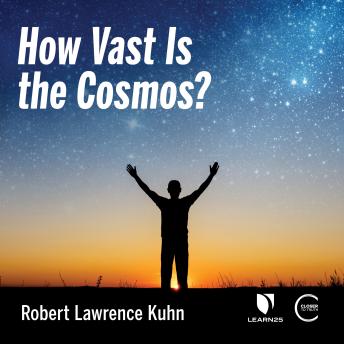 How Vast is the Cosmos?

Join some of Earth's leading scientists in exploring one of the universe's biggest mysteries. There is little more humbling than contemplating the magnitude of the known universe. That is, until you consider the possibility of worlds beyond that universe.

Join Dr. Robert Lawrence Kuhn, celebrated author and host of the hit PBS series Closer to Truth, as he probes the limits of the cosmos with 15 luminaries in astrophysics, cosmology, and astronomy.

The series begins with explorations of the universe's boundaries. Astronomer Royal Martin Rees raises the possibility that multiple big bangs may have created multiple universes, while Templeton Prize-winning physicist Paul Davies expresses doubt that we can access multiple universes from our own universe.

Discussing the origins of the cosmos, Gruber Prize-winning astronomer Wendy Freedman elucidates the residual evidence of our universe's fiery beginning. MIT physicist Alan Guth explains how his inflationary universe theory suggests that the Big Bang was not the beginning of all creation.

Woven together by Kuhn's awed musings on cosmic vastness, these conversations will guide your imagination across galaxies and into different dimensions. As you listen, you may, like Kuhn, find yourself "taken by the plenitude of all reality. "

How Vast is the Cosmos?