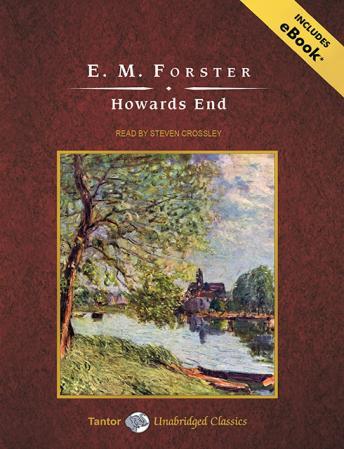 Considered by many to be E. M. Forster's greatest novel, Howards End is a beautifully subtle tale of two very different families brought together by an unusual event. The Schlegels are intellectuals, devotees of art and literature. The Wilcoxes are practical and materialistic, leading lives of 'telegrams and anger.' When the elder Mrs. Wilcox dies and her family discovers she has left their country home-Howards End-to one of the Schlegel sisters, a crisis between the two families is precipitated that takes years to resolve.

Written in 1910, Howards End is a symbolic exploration of the social, economic, and intellectual forces at work in England in the years preceding World War I, a time when vast social changes were occurring. In the Schlegels and the Wilcoxes, Forster perfectly embodies the competing idealism and materialism of the upper classes, while the conflict over the ownership of Howards End represents the struggle for possession of the country's future.

Forster refuses to take sides in this conflict. Instead he poses one of the book's central questions: In a changing modern society, what should be the relation between the inner and outer life, between the world of the intellect and the world of business? Can they ever, as Forster urges, 'only connect'?