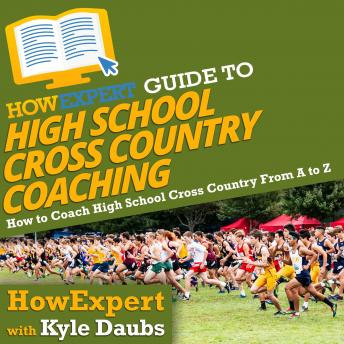 For coaches that want to evolve and learn new tricks about coaching cross country, then HowExpert Guide to High School Cross Country Coaching is the book for you. The author Kyle Daubs is a young coach that started a cooperative, cross country program between two schools. In its four year existence, the boys and girls rose to the top of their conference standings.

The author not only brings five years of coaching cross country experience but also brings a youthful approach to the game. The author received his bachelor’s and master’s degree in special education. He has taught special education the last four years. During this time, he started the cross country cooperative for Lowpoint-Washburn-Roanoke-Benson in 2016. During his time, he guided the girls cross country team to a conference championship in his second year of coaching and took the team to the IHSA Sectional meet.

He has also coached track since 2015. Since 2015, he has sent 22 athletes to state competition, including coaching three all-state relays and three all-state individuals.

As mentioned in the book, he claims that he does not know all methods to be successful, but has built a program that has sustained competitiveness among small schools. The author states that this book is great for first-time coaches, and even older coaches who want to learn a few new tricks.

The book is divided up among seven chapters. The chapter topics range from coaching philosophy, keys to motivation, planning, improving race performance, preparing, and reflection. The book also contains training plans that can range for beginning runners to the advanced.

The book also talks about how to handle the behind the scenes work. This includes working with parents, media, other coaches, and the administration. If there were a complete guide on how to coach a sport, this book is a must read.

HowExpert publishes quick 'how to' guides on all topics from A to Z by everyday experts.

This title is due for release on May 29, 2020
We'll send you an email as soon as it is available!