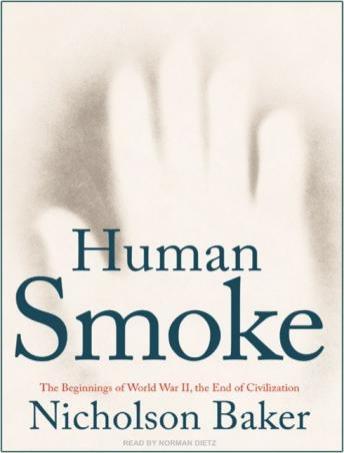 Human Smoke: The Beginnings of World War II, the End of Civilization

Human Smoke delivers a closely textured, deeply moving indictment of the treasured myths that have romanticized much of the 1930s and '40s. Incorporating meticulous research and well-documented sources-including newspaper and magazine articles, radio speeches, memoirs, and diaries-the book juxtaposes hundreds of interrelated moments of decision, brutality, suffering, and mercy. Vivid glimpses of political leaders and their dissenters illuminate and examine the gradual, horrifying advance toward overt global war and Holocaust.

Praised by critics and readers alike for his exquisitely observant eye and deft, inimitable prose, Baker has assembled a narrative within Human Smoke that unfolds gracefully, tragically, and persuasively. This is an unforgettable book that makes a profound impact on our perceptions of historical events and mourns the unthinkable loss humanity has borne at its own hand.

Human Smoke: The Beginnings of World War II, the End of Civilization