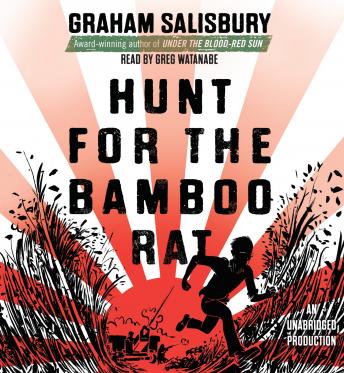 Hunt for the Bamboo Rat

Based on a true story, this World War II novel by Scott O’Dell Award winner Graham Salisbury tells how Zenji, 17, is sent from Hawaii to the Philippines to spy on the Japanese.


Zenji Watanabe was born in Hawaii. He’s an American, but the Japanese wouldn’t know it by the look of him. And that’s exactly what the US government is counting on.

Because he speaks both English and Japanese perfectly, the army recruits Zenji for a top-secret mission to spy on the Japanese. If they discover his true identity, he’ll be treated as a traitor and executed on the spot.

As World War II boils over in the Pacific, Zenji is caught behind enemy lines. But even though his Japanese heritage is his death warrant, it’s also his key to outwitting the enemy and finding the strength to face the terrors of battle, the savagery of the jungle, and the unspeakable cruelty of war.

The riveting Hunt for the Bamboo Rat is based on a true story and follows in the path of author Graham Salisbury’s other highly acclaimed Prisoners of the Empire titles, which began with the award-winning Under the Blood-Red Sun.

'Salisbury has once again crafted a fine novel, based on an actual person, about first-generation Americans of Japanese descent and the clash of culture and national identity that World War II accentuated. . . .  The story will leave readers spellbound.' —Kirkus Reviews, Starred

'Fast-paced and compelling, this title will be enjoyed by voracious and reluctant readers.' —SLJ

'The history is fascinating, and Zenji is a fictional hero readers will long remember.' —The Horn Book

Hunt for the Bamboo Rat