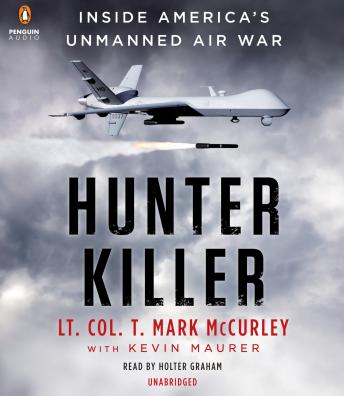 The first-ever inside look at the US military’s secretive Remotely Piloted Aircraft program—equal parts techno-thriller, historical account, and war memoir

Remotely piloted aircraft (RPA), commonly referred to by the media as drones, are a mysterious and headline-making tool in the military’s counterterrorism arsenal. Their story has been pieced together by technology reporters, major newspapers, and on-the-ground accounts from the Middle East, but it has never been fully told by an insider.

In Hunter Killer, Air Force Lt. Col. T. Mark McCurley provides an unprecedented look at the aviators and aircraft that forever changed modern warfare. This is the first account by an RPA pilot, told from his unique-in-history vantage point supporting and executing Tier One counterterrorism missions. Only a handful of people know what it’s like to hunt terrorists from the sky, watching through the electronic eye of aircraft that can stay aloft for a day at a time, waiting to deploy their cutting-edge technology to neutralize threats to America’s national security.

Hunter Killer is the counterpoint to the stories from the battlefront told in books like No Easy Day and American Sniper: While special operators such as SEALs and Delta Force have received a lot of attention in recent years, no book has ever told the story of the unmanned air war. Until now.

Awesome book.... As an Air Force Crew chief, I enjoyed learning more about these magnificent hunters!!!