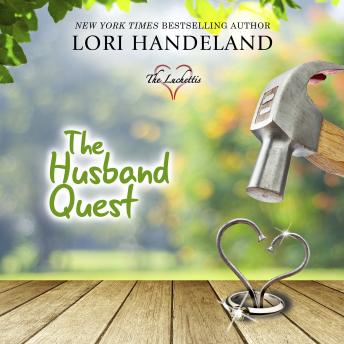 Jilly Hart has been called many things: gold digger, trophy wife, serial bride. She's led a difficult life, so she doesn't believe in love or magic—only assets. She doesn't ever plan to be poor or hungry again. However, when she finds herself a widow for the fourth time, she discovers that all she has left is a nineteenth-century inn in South Fork, Arkansas. She heads there with plans to sell the place and start her quest for husband number five. Unfortunately, the inn is not only a wreck but also haunted.

Evan Luchetti's brothers tease him about being 'just a gigolo.' But all he wants is a family. When his latest relationship falters after he proposes, he decides to change his life—in Arkansas. He accepts a job restoring a nineteenth-century inn.

When the two meet, sparks fly. But Evan wants forever, and Jilly has three rules she lives by:
1. Never, ever marry for love.
2. Poor men are for play; rich men are for keeps.
3. Old men are like fine wine. Once tasted, they don't last very long.

They strike a partnership to restore the inn and sell it so that Evan can be paid the money he's owed and Jilly can move forward with her quest. But the more time they spend together, the more things change.

Can Evan convince Jilly that love is magic and that it will make her so much richer than any life money can buy?