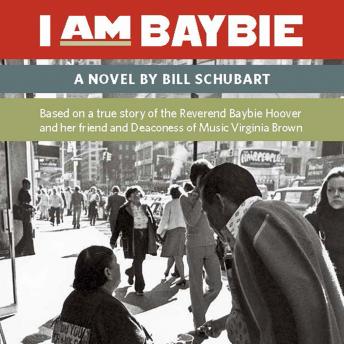 Nadine Hoover was sighted at birth and blinded by the drunken doctor bringing her into the world. The daughter she had herself as a teenager by a foster father who raped her became her greatest friend and comfort and Nadine kept her close until she died. Nadine renamed herself "Baybie" when she and her friend Virginia Brown moved to the streets of New York City where, she became a licensed minister and founded her church in an abandoned apartment in Brooklyn. If you lived in Manhattan and ever shopped at Bloomingdale's in the late 60's and early 70s, you met Baybie and Virginia singing there by the main entrance.

'I was born sighted but then was blinded by the drunken doctor who gave birth to me. I was raped by my foster father, and lied to when my little girl was born. She was sold for adoption without anyone asking me. When I had an abortion a few years later, the doctor told me he did me a favor by removing my ovaries, but he never asked me. The Lighthouse called us mendicants and wanted us to learn crafts, but we're working women -- buskers. We work for our living. I am the Reverend Baybie Hoover. I can sing for eight hours and never repeat a song. This is Ginger Brown, my Deaconess of Music. You are welcome to come to our little church.