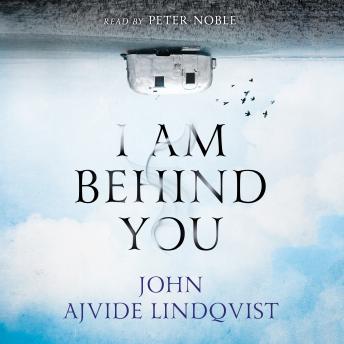 I Am Behind You

A compelling, eerie new audiobook from the internationally bestselling author of Let the Right One In.

'At the top of his game, Lindqvist gives Stephen King and John Saul at their best a run for the money.' —Library Journal (starred)

'Dubbed the Stephen King of Sweden, Lindqvist lives up to the billing.' —New York Post

Four families wake up one morning in their trailer on an ordinary campsite. However, during the night something strange has happened. Everything outside the camping grounds has disappeared, and the world has been transformed into an endless expanse of grass. The sky is blue, but there is no sign of the sun; there are no trees, no flowers, no birds. And every radio plays nothing but the songs of sixties pop icon Peter Himmelstrand.

As the holiday-makers try to come to terms with what has happened, they are forced to confront their deepest fears and secret desires. Past events that each of them has tried to bury rise to the surface and take on terrifying physical forms. Can any of them find a way back to reality?

I Am Behind You