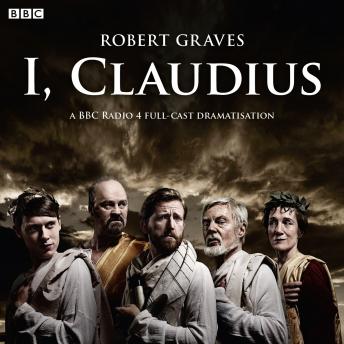 A BBC Radio 4 full-cast dramatisation of Robert Graves' brilliant account of the madness and debauchery of ancient Rome, starring Tom Goodman Hill as Claudius and Derek Jacobi as Augustus. The wickedly entertaining inside story of the lives and deaths of the Imperial dynasty from Augustus to Caligula is told by their obscure relation, Claudius. In public, Claudius is a stammering, drooling weakling, whose reputation as an idiot keeps him safe from office and assassination. But in private, he's as sharp as they come, and keeps a secret history of everything he discovers. Until one day, as one of the few of his family left alive, he's acclaimed Emperor against his will. Can he save Rome from the corruption he's grown to detest? Featuring Derek Jacobi (who won a BAFTA for his performance as Claudius in the acclaimed 1977 BBC television production) as Augustus, and with an all-star cast, this gripping dramatisation will enthral anyone who loves the decadence of Ancient Rome.