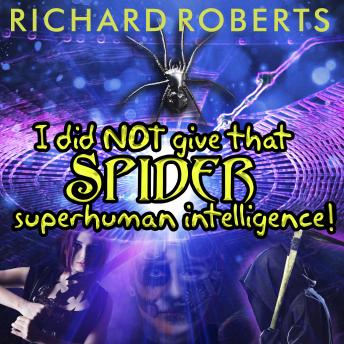 I Did NOT Give That Spider Superhuman Intelligence!

Being a superhero should be fun. After all, a world of super powers is a world where amazonian juggernauts made of candy battle guys in spandex that drive talking cars. Irene loves that weirdness, loves the game of fighting, and loves being a four-foot-tall woman who still gets to drop big heavy objects on villains' heads.

In 1980, that fun is in danger. A mad scientist who murders people for his research has everyone afraid. Two of the friendliest super powered rivals around stop playing and go for the kill. If superheroes and villains aren't safe in their own homes, how can having powers be anything but a nightmare?

Irene will not let that happen. She wants to show her friends-a ten-year-old grim reaper, and a zombie mish-mosh of living and metal parts-that their lives don't have to be grim. With the help of a superintelligent spider, Team Tiny will make the world fun again.

Except maybe it's the spider who's in charge after all . . .

I Did NOT Give That Spider Superhuman Intelligence!