I Feel Like Going On: Life, Game, and Glory 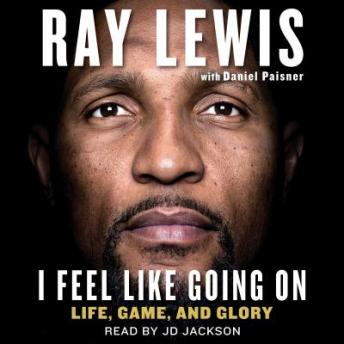 In this New York Times bestselling memoir, Ray Lewis—legendary Baltimore Ravens linebacker and one of the greatest defensive players of his generation—holds nothing back on the state of football as well as his troubled childhood, his rise to athletic greatness, the storm that threatened to ruin his NFL career, and the devastating injury that nearly cost him a final moment of glory.

Ray Lewis is undeniably one of the biggest names in football—not only for his seventeen years in the NFL, but also for the dramatic events that nearly brought his career to a halt in 2000. In his memoir, Lewis shares honest accounts of his difficult childhood and delves into the anguish and controversy that he found away from the game. But these heartbreaks gave him the courage to trust in God and continue his dream to play for the NFL and win the Super Bowl.

From a rookie player to a football veteran, Lewis has experienced everything imaginable during his football career, and has become one of the best defensive players in the history of the NFL. I Feel Like Going On is the story of his incredible journey, and a sincere look at the most popular sport in America from one of football’s most revered players.

I Feel Like Going On: Life, Game, and Glory