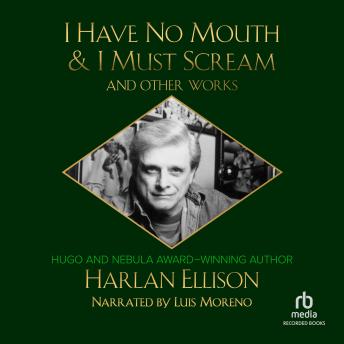 I Have No Mouth & I Must Scream and Other Works

I Have No Mouth & I Must Scream In a post-apocalyptic world, four men and one woman are all that remain of the human race, brought to near extinction by an artificial intelligence. Programmed to wage war on behalf of its creators, the AI became self-aware and turned against humanity. The five survivors are prisoners, kept alive and subjected to brutal torture by the hateful and sadistic machine in an endless cycle of violence. This story and six more groundbreaking and inventive tales that probe the depths of mortal experience prove why Grand Master of Science Fiction Harlan Ellison has earned the many accolades to his credit and remains one of the most original voices in American literature. Paingod and Other Delusions Robert Heinlein says, "This book is raw corn liquor-you should serve a whiskbroom with each shot so the customer can brush the sawdust off after he gets up from the floor." Perhaps a mooring cable might also be added as necessary equipment for reading these eight wonderful stories. They not only knock you down ... they raise you to the stars. Passion is the keynote as you encounter the Harlequin and his nemesis, the dreaded Tictockman, in one of the most reprinted and widely taught stories in the English language; a pyretic who creates fire merely by willing it; the last surgeon in a world of robot physicians; a spaceship filled with hideous mutants rejected by the world that gave them birth. Touching, gentle, and shocking stories from an incomparable master of impossible dreams and troubling truths. From the Land of Fear Eleven side trips to the dark edge of imagination by master storyteller Harlan Ellison, From the Land of Fear presents some of the author's early work from his start in the late fifties. Here you can see a vibrant, imaginative young writer honing his craft and sowing the seeds of what would become his brilliant career, including the standout piece "Soldier," a clever antiwar tale included both in shortstory form and as a screenplay for TV's The Outer Limits. True Ellison fans will enjoy this collection as a chance to see the writer's growth over time. As Roger Zelanzy says in his wonderful introduction, "He is what he is because of everything he's been up until the Now."

I Have No Mouth & I Must Scream and Other Works