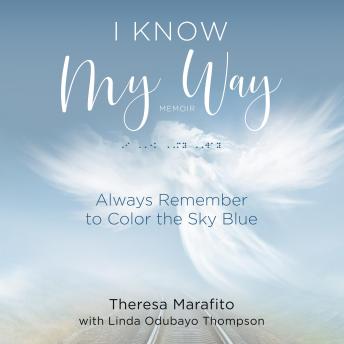 I Know My Way Memoir: Always Remember to Color the Sky Blue

Theresa Marafito, daughter of Irish immigrant parents, was born in 1933 in New York City, blind in one eye with partial vision in the other. She was a precocious child who wanted to appear "normal" to her peers and family, regardless of her disability. Her game was to be independent, not dependent and would rarely ask for help.

In late 1986, Theresa's perfect world came to a crashing halt when her soul mate Jerry lost his life to cancer. She was so devastated that she poured her heart out on an old manual typewriter trying to capture all of her precious memories. It was after her very tragic death in 2008 that the notes were found and became the starting point of this memoir.

Linda, as daughter and Copywriter for several years, knew it would be a great pleasure to capture the essence of her mother's life in this memoir, and help the sighted world to have a better picture of a typical family model with the difficulties of living with visually impaired members. She was up to the task of explaining the level of emotion needed to convey the tension at every turn because she is now almost blind herself, and lost her first husband to cancer as well.

I Know My Way Memoir: Always Remember to Color the Sky Blue