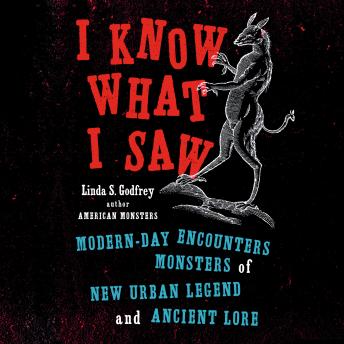 I Know What I Saw: Modern-Day Encounters with Monsters of New Urban Legend and Ancient Lore

The monsters of ancient mythology, folklore, and more contemporary urban legend have long captured the popular imagination. While most people in America today relegate monsters to just that--our imaginations--we continue to be fascinated by the unknown. Linda Godfrey is one of the country's leading authorities on modern-day monsters and has interviewed countless eyewitnesses to strange phenomena. Monsters evolve, taking on both new and familiar forms over time and across cultures. In this well-researched book, Godfrey explores uncanny encounters with werewolves, goatmen, Bigfoot, and more.

In more than twenty-five years spent 'chasing' monsters, Godfrey has found that it often remains unclear whether the sightings are simply mistaken animals, hoaxes, or coincidence. When all the speculation is said and done, one question remains for fans and researchers: Are the creatures 'real,' or are they entirely 'other-world?' Godfrey suspects that it isn't an either/or question--our reality operates on a scale from dense matter to realms the human eye cannot see.

As Godfrey investigates unexplained phenomena, her search for answers will fascinate casual observers and enthusiasts alike.

I Know What I Saw: Modern-Day Encounters with Monsters of New Urban Legend and Ancient Lore