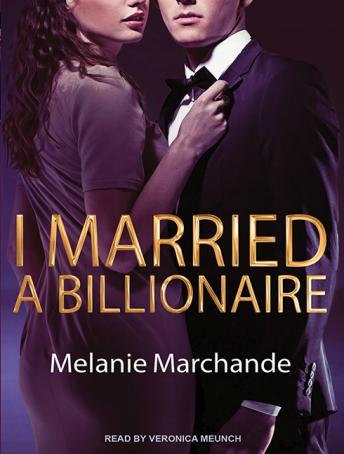 I Married a Billionaire

Maddy Wainright has given up on marriage-and men. After dating way too many losers who aren't capable of appreciating her for who she is, she's about ready to resign herself to a life of spinsterhood. Until her insanely rich boss Daniel Thorne comes along with an offer she simply can't refuse.

He proposes a marriage of convenience-one that would allow Maddy to live in the lap of luxury for a year and Mr. Thorne to stay in the country that has become his home. At the end of their arrangement, Maddy will walk away with a cool two million dollars. All she has to do is move into his penthouse, put on a convincing show in public, and endure a few INS interviews, for which she will be thoroughly prepped. It's a big risk, but one Maddy might just be willing to take, considering the payoff.

At first, it's all business. But when the gentle touches, passionate kisses, and lingering looks they have to give each other in public start spilling over into their private life, Daniel and his devious mind take Maddy to heights of pleasure she's never experienced. And the more she gets to know him, the more she feels that wistful tug in her chest every time he puts his arm around her in public. Before long, she finds herself wishing it were real.

As time goes on, Maddy finds herself wondering if two million dollars will be enough to cover the cost of repairing a broken heart. But Mr. Thorne may have yet another secret in store . . .

I wanted to like this book but there was just something to missing... Oh I know... Connection. Heat... Fire. With most romance books that involve a fake relationship to begin... There's at least an attraction that is evident with just the words on page. There's was very little of this.. in fact Daniel Was very very cold and blah the entire story. With the exception of one moment in the book he was very robotic. Maddy came off as a push over and never really spoke up for herself. So disappointing.

I loved this story. The narrator was so suited to reading this book.

I loved this story, it holds a great similarity to the movie The Proposal. In this situation the proposition is opposite, Jesse's the boss and Maddy is the worker. This would be a great movie, but I really enjoyed the story. Can't wait to read the other two installments.