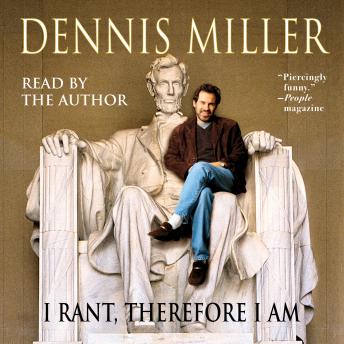 I Rant, Therefore I Am

Once again there's good news for those of us who rage at the evening news, shake our heads at Washington's business-as-usual, or watch as politicians carom helplessly between political crises and sex scandals: Dennis Miller is back with his third installment of hilarious observations, I Rant, Therefore I Am.

Dennis Miller first gained national acclaim as the wise-guy anchor of "Weekend Update" on "Saturday Night Live." When HBO premiered his weekly talk show in April 1994, both critics and fans enthusiastically agreed: "Dennis Miller Live" was the most refreshing talk show on television.

The accolades have continued to pour in. In September 1994, Dennis and his staff won an Emmy Award for writing and have been regularly nominated since. When he takes the stage, the audience demands, "The rants, the rants, the rants," and once again, Dennis Miller delivers the goods. Fans of his smart, quirky, irreverent style of humor are in for another treat-this set of rants is even funnier than the last two rounds.

Dennis Miller keeps on ranting in I Rant, Therefore I Am, and speaks his mind on topics like:

MODELS-"How ironic that the most exquisite-looking people in the world should end up choosing the profession that requires them to spend all day by the phone waiting for the most hideous people to call them."

COLLEGE-"I don't think you should have to pay back college loans unless you get a job in your field. Put some pressure on the school. If I can't pay my bills, I'm not paying yours."

CONSUMERS-"You know how to tell when you've got a shopping problem? When the lights in the department store momentarily dim after they slide your credit card through the thing."

FAITH-"I envy people who can just let go and totally commit. I, on the other hand, can't even hear the title of the show 'Touched by an Angel' without thinking that a professional baseball player is being sued for sexual harassment."

ASTRONAUTS-"Anybody who would strap themselves onto a giant deodorant spray can, set off a series of explosions under their ass until they've been blasted into the icy vacuum of deep space, and then step outside to take a walk must have more balls than a twenty-four-hour Tokyo driving range."