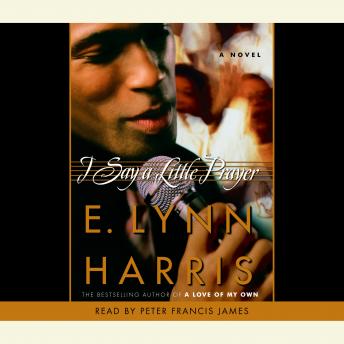 I Say a Little Prayer

Bestselling author E. Lynn Harris is back with another sexy, shocking, and immensely satisfying novel that explores some of today’s toughest and most timely issues.
Chauncey Greer is the owner of Cute Boy Card Company, a thriving company in Atlanta. As a teenager, he was a member of a popular boy band, but left in disgrace when word got out that he and his band mate D were more than good friends. Chauncey is a free spirit, on the brink of forty with a body admired by both men and women. Not into being categorized, Chauncey’s been known to hook up with men and women, but now in the age of the “down low,” he’s found that women ask too many questions, so he’s just focusing on the fellas.
After one too many bad dates, Chauncey finds himself in church where the minister’s message inspires him to follow his dream of a singing career once again. Although he’s lost touch with D, as he starts writing songs his thoughts inevitably turn to his former lover. Chauncey’s powerful performance at the church earns him a standing ovation and an invitation to participate in an upcoming revival. But Chauncey soon discovers that an ambitious fundamentalist preacher plans to use the revival to speak out against gays and gay marriage. Feeling angry and betrayed, Chauncey and other gay members of the church decide to take a stand against the church’s homophobia by staging a “Day of Absence” when all of the gay members and their friends and family stay home. Everything is going as planned …until D appears on the scene and Chauncey has to confront his past and make some hard decisions about his future. I SAY A LITTLE PRAYER is filled with the delicious plot twists, humor, compassion, and up-to-the-minute controversy fans expect from their beloved “E. Lynn.” Harris has returned with another gem of a novel that will rocket to the top of bestseller lists nationwide.

I Say a Little Prayer