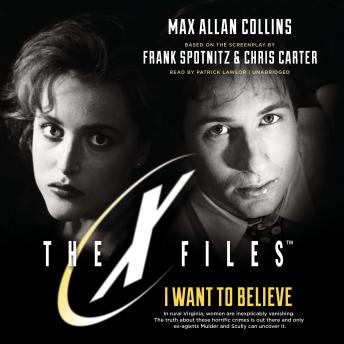 I Want to Believe

During abrutal winter in rural Virginia, women are inexplicably vanishing. The only clues to thebizarre disappearances are the grotesque human remains that are turning up insnow banks along the highway. And a disgraced priest has begun to experiencestrange and disturbing visions connected to a terrible secret. But are theimages haunting a fallen man of God to be trusted ... or are they the deadly liesof a twisted mind?
It is a case right out of theX-Files. But the FBI suspended itsinvestigations into the paranormal years ago. Ex-agents Fox Mulder and Dr. DanaScully are the best team for the job, but they have no desire to revisit thepast. The truth about these horrific crimes is out there, and only Mulderand Scully can uncover it.

I Want to Believe