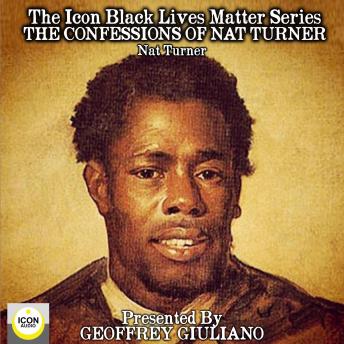 Nat Turner was an enslaved African-American preacher who led a four-day rebellion of enslaved and free black people in Southampton County, Virginia in 1831. Turner was recorded simply as 'Nat' by Benjamin Turner, the man enslaving this family. When Turner died in 1810, Nat was inherited as property by Benjamin's son Samuel Turner.
Turner later led a violent rebellion of black slaves in Southampton County, Virginia, in August 1831. Fugitive enslaved people killed from 55 to 65 people, at least 51 being white. The rebellion was put down within a few days, but Turner survived in hiding for more than two months. The rebellion was effectively suppressed at Belmont Plantation on the morning of August 23, 1831.Turner was hanged on November 11 in Jerusalem, Virginia. This is his story.

Edited by Macc Kay
Production executive Avalon Giuliano
ICON Intern Eden Giuliano
Music By AudioNautix With Their Kind Permission
©2020 Eden Garret Giuliano (P) Eden Garret Giuliano
Geoffrey Giuliano is the author of over thirty internationally bestselling biographies, including the London Sunday Times bestseller Blackbird: The Life and Times of Paul McCartney and Dark Horse: The Private Life of George Harrison. He can be heard on the Westwood One Radio Network and has written and produced over seven hundred original spoken-word albums and video documentaries on various aspects of popular culture. He is also a well known movie actor.