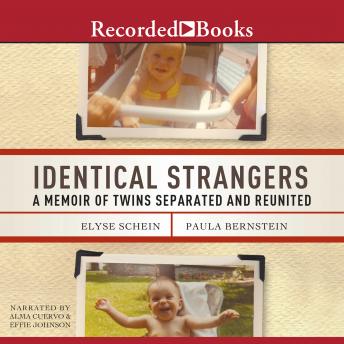 Identical Strangers: A Memoir of Twins Separated and Reunited

Elyse Schein had always known she was adopted, but it wasn't until her mid-thirties while living in Paris that she searched for her biological mother. What she found instead was shocking: She had an identical twin sister. What's more, after being separated as infants, she and her sister had been, for a time, part of a secret study on separated twins. Paula Bernstein, a married writer and mother living in New York, also knew she was adopted, but had no inclination to find her birth mother. When she answered a call from her adoption agency one spring afternoon, Paula's life suddenly divided into two starkly different periods: the time before and the time after she learned the truth. As they reunite, taking their tentative first steps from strangers to sisters, Paula and Elyse are left with haunting questions surrounding their origins and their separation. And when they investigate their birth mother's past, the sisters move closer toward solving the puzzle of their lives.

Identical Strangers: A Memoir of Twins Separated and Reunited