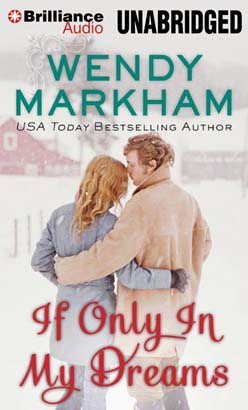 If Only In My Dreams

Actress Clara McCallum just got her big break. She’s thrilled about landing the lead role in a big WWII film. But her dream-come-true excitement is short-lived. She’s just received devastating news and has been reeling ever since. The last thing Clara wants is to spend Christmas alone in New York City, but she’s determined to stay on location for the movie. Anything for her craft, right? Which is perfect since she’s playing a woman who’ll do anything for the love of doomed soldier Jed Landry. But Clara’s resolve turns to astonishment when she steps off an old-fashioned locomotive from the set and finds herself whisked back in time — and into the arms of the real-life Jed. She’s convinced it’s some sort of hallucination. But before long she finds herself swept away by the handsome soldier and wondering if her plunge into the past could change the course of the future . . . and turn out to be the best Christmas present ever.

If Only In My Dreams