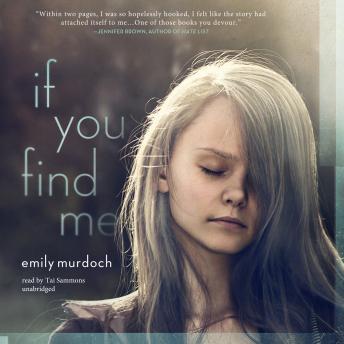 If You Find Me

A deeply compelling mix of high school drama and page-turning mystery that asks profound questions about family, truth, and love
Fifteen-year-old Carey and six-year-old Jenessa have been living in the woods with their mother for as long as they can remember; the sheltering trees and a broken-down camper are all they know. But what they've never been told is that Carey vanished from the real world ten years ago, when their mother took her, causing an uproar in the media-and in her father's life.
Now, abandoned by the mother they trusted, they're often left alone for long periods of time to fend for themselves-but, in one moment, everything changes. They're found by Carey's father and thrust into a bright and perplexing new world, one of shopping malls, shiny appliances, new clothes, and mouth-watering food. Carey desperately wants to believe in this new reality but is held back by a deep and painful loyalty to her mentally ill mother, who gave Carey her violin and taught her how to play the soaring music that helps her survive.
And then there's the other piece of Carey's past that haunts her, the story of what happened to her and Jenessa on that dark night in the woods-the reason Jenessa hasn't spoken a word in over a year. Will Carey ever be able to trust her father and his family enough to fit into this new life? Will Jenessa finally break her silence and ruin the cocoon of safety that Carey's built so carefully around them? And what will happen if the secret comes out?

If You Find Me