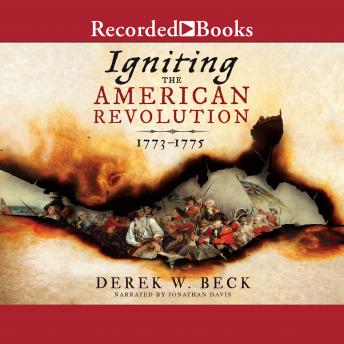 Few Americans know that the Revolutionary War did not begin with the Declaration of Independence on July 4, 1776 but over a year earlier in April 1775. Now historian Derek Beck draws on previously unpublished documents to tell the full story of the war before American independence-from both sides. Spanning the years 1773-1776, this sweeps readers from the Boston Tea Party to the halls of Parliament-where Ben Franklin was almost run out of England for pleading on behalf of the colonies-to the fateful Expedition to Concord that resulted in the shot heard round the world. Vividly detailed and meticulously researched, this captivating historyreveals in a new light the perspectives and events that altered the futures of not only England and America, but the whole world. Derek W. Beck is an historian whose history writing has appeared in multiple history journals, scholarly works, and reviews and has been cited by The Boston Globeamong other publications. He is a Major in the U.S. Air Force Reserves, a graduate of the Air Command and Staff College, and is the recipient of numerous medals and awards for his achievements. Beck's education includes a Master of Science degree in Engineering & Management from the Massachusetts Institute of Technology. He lives in Los Angeles, CA, with his wife, Vicky. AMERICA 1775 is his first book. Key Selling Points: - Includes groundbreaking research from never-before-seen documents, letters, diaries and other primary sources, including British perspectives - Strong comps, such as Revolutionary Summer and 1775: A Good Year for Revolution, show American Revolutionary history is as popular as ever - Offers a unique, unexplored angle by showcasing the year leading up to the American Revolution and the Declaration of Independence