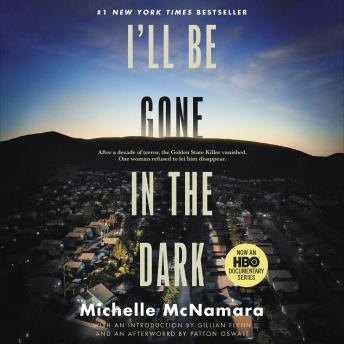 I'll Be Gone in the Dark: One Woman's Obsessive Search for the Golden State Killer

THE BASIS FOR THE MAJOR 6-PART HBO® DOCUMENTARY SERIES

A BEST BOOK OF THE YEAR:

The haunting true story of the elusive serial rapist turned murderer who terrorized California during the 70s and 80s, and of the gifted journalist who died tragically while investigating the case—which was solved in April 2018.

The haunting true story of the elusive serial rapist turned murderer who terrorized California for over a decade—and of the gifted journalist who died tragically while investigating the case.

For more than ten years, a mysterious and violent predator committed fifty sexual assaults in Northern California before moving south, where he perpetrated ten sadistic murders. Then he disappeared, eluding capture by multiple police forces and some of the best detectives in the area.

Three decades later, Michelle McNamara, a true crime journalist who created the popular website TrueCrimeDiary.com, was determined to find the violent psychopath she called 'the Golden State Killer.' Michelle pored over police reports, interviewed victims, and embedded herself in the online communities that were as obsessed with the case as she was.

I’ll Be Gone in the Dark—the masterpiece McNamara was writing at the time of her sudden death—offers an atmospheric snapshot of a moment in American history and a chilling account of a criminal mastermind and the wreckage he left behind. It is also a portrait of a woman’s obsession and her unflagging pursuit of the truth. Utterly original and compelling, it is destined to become a true crime classic—and may at last unmask the Golden State Killer.

I LOVE this book! Could not stop listening. An amazing story. Really well written.

This was an awesome book. Bracing writing style by McNamara. Well-researched is an understatement.

I think this book may have been a little easier to read on paper versus the audiobook. There were too many characters and the author did not go in chronological order so it became a little confusing. The story was interesting but slightly disorganized and repetitive.

Fantastic, thrilling read. Binged it in 2 days. McNamara paints a beautiful and unique picture. The work is Brilliant.

Incredibly well done! Gripping, tantalizing, and fascinating research and true life mystery. I truly enjoyed McNamara’s unique, gifted writing style. She and her story are as interesting as the story she writes. Narration was superb and well paced. Loved this book!

Wow....highly recommend - well done - excellent details. On another sad note I was so sorry to hear of Michelle’s passing...truly one dedicated woman....

I started reading this book along with the HBO series on TV. It's cool to see how they finished her book after she died. My only wish was that she could be alive to see the capture of the Golden State Killer. She would of been thrilled!

Amazing. Such dedication and well written

love the story. Dislike narration. Not a fan of the changes in tone like trying to change character voices and sounding like whispering. Just read like a normal person.

I didn’t make it through this book. I found it boring only because I wanted to hear more about the serial killer and less about every detail of the authors life.

I would like 2 say it was a fairly good book, but the constant cutting out. I couldn't even finish it. Having 2 say my tablet is brand new an also the headphone.

This is one of the best books we have listened to. My family lived in Rancho Cordova during this period. My brother actually knew and hung out with one of the policeman mentioned in the book. The details are fantastic. I had no idea when I bought this book that we had a personal connection to the area.

Loved it! Definitely a favorite...plus it’s a true story

The story was overall interesting and the narration was excellent. However, the nonlinear telling was confusing, and at times it was tedious; as a result my mind frequently wandered.

This novel is very well written. Being a true crime novel, Michelle McNamara does an exceedingly well job at conveying compassion and empathy for the victims and their families. I don't read a lot of non fiction and even I can appreciate the time and effort Michelle McNamara put into this novel. She put herself in it as well, and you can see how she was obsessed in finding the Golden State Killer. A highly absorbing read.

Amazing amount of due diligence and research that went into this book. One can only imagine how this became almost all-consuming by McNamara, it's written with great insight not just facts.