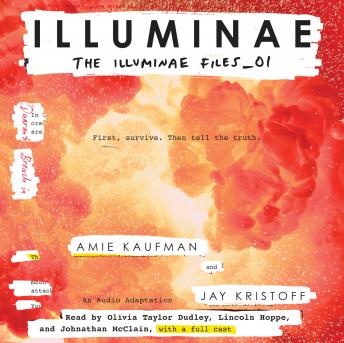 #1 of The Illuminae Files

For fans of Marie Lu comes the first book in an epic series that bends the sci-fi genre into a new dimension.

This morning, Kady thought breaking up with Ezra was the hardest thing she’d have to do. This afternoon, her planet was invaded.
The year is 2575, and two rival megacorporations are at war over a planet that’s little more than a speck at the edge of the universe. Now with enemy fire raining down on them, Kady and Ezra—who are barely even talking to each other—are forced to evacuate with a hostile warship in hot pursuit.
But their problems are just getting started. A plague has broken out and is mutating with terrifying results; the fleet’s AI may actually be their enemy; and nobody in charge will say what’s really going on. As Kady hacks into a web of data to find the truth, it’s clear the only person who can help her is the ex-boyfriend she swore she’d never speak to again.
Told through a fascinating dossier of hacked documents—including emails, maps, files, IMs, medical reports, interviews, and more—Illuminae is the first book in a heart-stopping trilogy about lives interrupted, the price of truth, and the courage of everyday heroes.

“Prepare yourselves for Illuminae.” —EW.com

“Brace yourself. You're about to be immersed in a mindscape that you'll never want to leave.”  —Marie Lu, bestselling author of the Legend trilogy

“This is one of those rare books that will truly keep your heart pounding.” —Beth Revis, bestselling author of Across the Universe

“This book is xxxxing awesome.”
—Laini Taylor, bestselling author of Daughter of Smoke and Bone

Probably the most interesting audiobook I? have ever listened to. And nothing like I’ve heard before. The sound effects that accompany each file, the different methods of information delivery, the inflections in each character’s voice and the dramatic timing all come together to really bring the book alive. The story is fascinating in itself but the delivery truly makes you feel as though you’re on the ship with them. Highly recommend and can’t wait to listen to the next one in the series.

It is freaking amazing!!!! The sound affects, the different character voices, it is just amazing. First time hearing an audiobook and I am in awe.

Trite YA novel with hackneyed language and gender tropes, great narration. Overall it got me through a long drive but without value added.