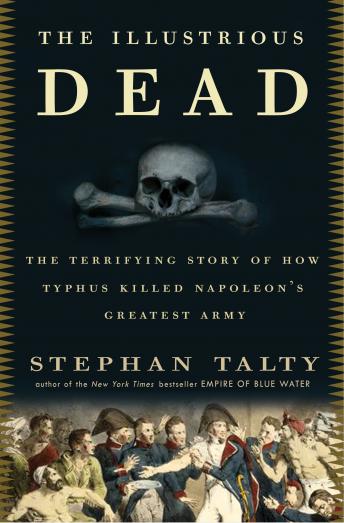 The Illustrious Dead: The Terrifying Story of How Typhus Killed Napoleon's Greatest Army

“Gripping . . . a compelling story of personal hubris and humbling defeat.”
—Jack Weatherford,author of the New York Times bestseller Genghis Khan and the Making of the
Modern World

In a masterful dual narrative that pits the heights of human ambition and achievement against the supremacy of nature, New York Times bestselling author Stephan Talty tells the story of a mighty ruler and a tiny microbe, antagonists whose struggle would shape the modern world.

In the spring of 1812, Napoleon Bonaparte was at the height of his powers. Forty-five million called him emperor, and he commanded a nation that was the richest, most cultured, and advanced on earth. No army could stand against his impeccably trained, brilliantly led forces, and his continued sweep across Europe seemed inevitable.

Early that year, bolstered by his successes, Napoleon turned his attentions toward Moscow, helming the largest invasion in human history. Surely, Tsar Alexander’s outnumbered troops would crumble against this mighty force.

But another powerful and ancient enemy awaited Napoleon’s men in the Russian steppes. Virulent and swift, this microscopic foe would bring the emperor to his knees.

Even as the Russians retreated before him in disarray, Napoleon found his army disappearing, his frantic doctors powerless to explain what had struck down a hundred thousand soldiers. The emperor’s vaunted military brilliance suddenly seemed useless, and when the Russians put their own occupied capital to the torch, the campaign became a desperate race through the frozen landscape as troops continued to die by the thousands. Through it all, with tragic heroism, Napoleon’s disease-ravaged, freezing, starving men somehow rallied, again and again, to cries of “Vive l’Empereur!”

Yet Talty’s sweeping tale takes us far beyond the doomed heroics and bloody clashes of the battlefield. The Illustrious Dead delves deep into the origins of the pathogen that finally ended the mighty emperor’s dreams of world conquest and exposes this “war plague’s” hidden role throughout history. A tale of two unstoppable forces meeting on the road to Moscow in an epic clash of killer microbe and peerless army, The Illustrious Dead is a historical whodunit in which a million lives hang in the balance.