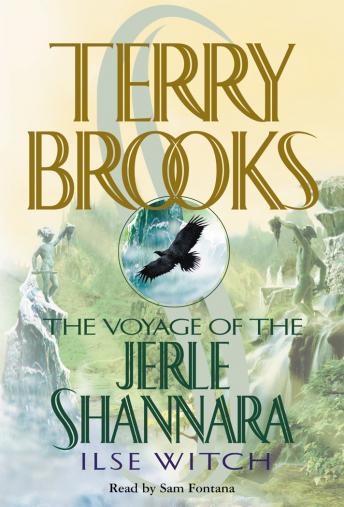 Ilse Witch: The Voyage of the Jerle Shannara: Ilse Witch

#1 of The Voyage of the Jerle Shannara

For more than twenty years, New York Times bestselling author Terry Brooks has proven himself one of the modern masters of fantasy, winning the hearts and minds of devoted readers around the world with his classic Shannara epic.

When a half-drowned elf is found floating in the seas of the Blue Divide, an old mystery resurfaces. Thirty years ago, an elven prince led an expedition in search of a legendary magic said to be more powerful than any in the world. Of all those who set out on that ill-fated voyage, not one has ever returned.

The rescued elf carries a map covered with mysterious symbols–and Walker Boh, the last of the Druids, has the skill to decipher them. But someone else understands the map’s significance: the Ilse Witch, a ruthless young woman who wields a magic as potent as his own. She will stop at nothing to possess the map–and the magic it leads to.

Return to the world of beloved novelist Terry Brooks, where creatures drift up from the earth like mist, a hypnotic song can kill, a sword can cut through a veil of lies–and one man, the true heir of an ancient magic, must choose between betrayal and redemption.

narrator does not give chapter (start of) notifications, only slight pauses at end of paragraph to the start of another.

not happy with this abridged version. missing parts of chapters

The first book in this series. It has flying pirate ships and magic and it explains the background info if you haven't read any of the other series

This title is due for release on September 5, 2000
We'll send you an email as soon as it is available!