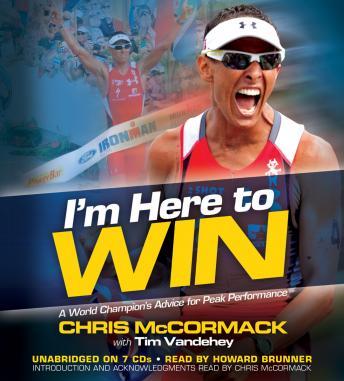 In I'M HERE TO WIN, Chris 'Macca' McCormack opens his playbook and reveals everything it takes-mind, body, and spirit-to become a champion. Now he shares the story of his triumphs and the never-say-die dedication that has made him the world's most successful triathlete.

In 2010, at the age of 37, Macca beat the odds and won the Ford Ironman World Championship in Kona, Hawaii for a second time in what many called the most dramatic finish in the race's history. Macca's journey to athletic greatness is more than just one of physical perseverance. After coming in fourth in Hawaii in 2009, Macca returned to the island on a mission: He was there to win. A game plan containing a new strategic approach to winning brought him first across the finish line.

Chris McCormack has dedicated his life to training for-and winning-the Ironman Hawaii, one of the most grueling tests of mental and physical endurance in the world. The race challenges athletes to swim 2.4 miles, bike 112 miles, and run a full marathon, 26.2 miles, using all their strength and willpower to overcome the incredibly harsh conditions.

In I'M HERE TO WIN Macca provides concrete training advice for everyone-from weekend warriors who casually compete to seasoned veterans who race every week to armchair athletes looking for an extra push-and provides insight into the mind of a great champion with excitement and inspiration at every turn.

I'M HERE TO WIN is also available as an enhanced e-book with embedded video and audio.