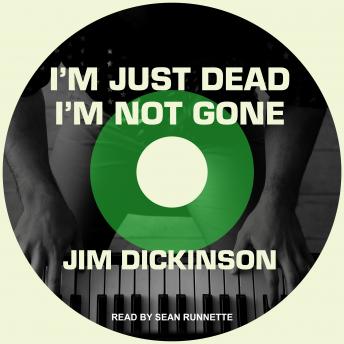 I'm Just Dead, I'm Not Gone chronicles Jim Dickinson's extraordinary life in the Memphis music scene of the fifties and sixties and how he went on to play with and produce a rich array of artists, including Aretha Franklin, the Rolling Stones, Ry Cooder, Duane Allman, Arlo Guthrie, and Albert King. With verve and wit, Dickinson (1941-2009) describes how his trip to Blind Lemon's grave on the Texas flatlands as a college student and how that encounter inspired his return to Memphis. Back home, he looked up Gus Cannon and Furry Lewis, began staging plays, cofounded what would become the annual Memphis Blues Festival, and started recording.

The blues, Elvis, and early rock 'n' roll compelled Dickinson to reject racial barriers and spurred his contributions to the Memphis music and experimental art scene. He explains how the family yardman, WDIA, Dewey Philips, Furry Lewis, Will Shade, and Howlin' Wolf shaped him and recounts how he went on to learn his craft at Sun, Ardent, American, Muscle Shoals, and Criteria studios from master producers Sam Phillips, John Fry, Chips Moman, and Jerry Wexler.

This title is due for release on April 1, 2017
We'll send you an email as soon as it is available!