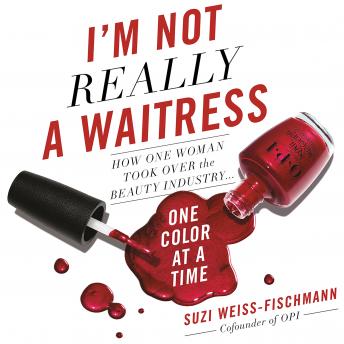 I'm Not Really a Waitress: How One Woman Took Over the Beauty Industry One Color at a Time

Inspiring women to pursue their own colorful dreams, I'm Not Really a Waitress tells the story of how Suzi Weiss-Fischmann transformed a small dental supply company into a #1 beauty brand around the world

Today, OPI is known as a global beauty brand, famous for its trend-setting colors, unforgettable shade names, and celebrity collaborations with the biggest stars from film, television, music, and sports. But behind all the glamour is the little-known tale of OPI's unlikely origins-an intimate and inspiring story of a timid schoolgirl who arrives in this country with little money and no English and becomes the business leader and industry game-changer known worldwide as 'Suzi, the First Lady of Nails.'

In I'm Not Really a Waitress--titled after OPI's top-selling nail color--Suzi reveals the events that led her family to flee Communist Hungary and eventually come to New York City in pursuit of the American dream. She shares how those early experiences gave rise to OPI's revolutionary vision of freedom and empowerment, and how Suzi transformed an industry by celebrating the power of color-and of women themselves.

I'm Not Really a Waitress: How One Woman Took Over the Beauty Industry One Color at a Time