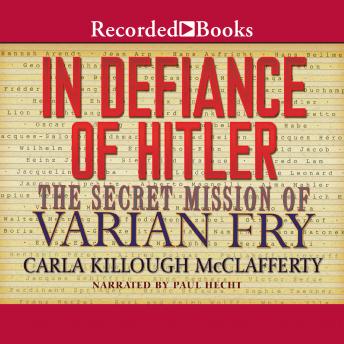 In Defiance of Hitler: The Secret Mission of Varian Fry

On August 4, 1940, an unassuming American journalist named Varian Fry made his way to Marseilles, France, carrying in his pockets the names of approximately two hundred artists and intellectuals - all enemies of the new Nazi regime. As a volunteer for the Emergency Rescue Committee, Fry's mission was to help these refugees flee to safety, then return home two weeks later. As more and more people came to him for assistance, however, he realized the situation was far worse than anyone in America had suspected - and his role far greater than he had imagined. He remained in France for over a year, refusing to leave until he was forcibly evicted. At a time when most Americans ignored the atrocities in Europe, Varian Fry engaged in covert operations, putting himself in great danger, to save strangers in a foreign land. He was instrumental in the rescue of over two thousand refugees, including the novelist Heinrich Mann and the artist Marc Chagall.