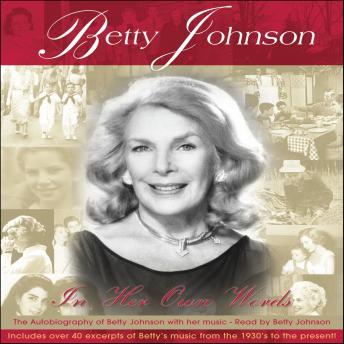 In Her Own Words

Betty Johnson's first career in music coincided with the music career of her family, The Johnson Family Singers. Starting in 1938 and throughout the 1940's, this young soprano sang hymns with her parents and three brothers at churches, military bases and on a daily radio broadcast throughout the South. As the 1950's dawned, Betty began her second career, a solo career that took her from NYC to San Francisco and Chicago to New Orleans with live performances on a regular basis. Frequent appearances on the Ed Sullivan Show and Jack Paar's Tonight Show coincided with the recording of several hit songs for RCA, Bell Records, and Bally Records in Chicago. In 1958, Betty joined Atlantic records and hit the pop charts with 3 hits in her first year alone. Fast forward 50 years and Betty is well into her third career in music. If you ask her how it's going, she's likely to respond''Life is good and it just keeps getting better.'

In Her Own Words

This title is due for release on July 19, 2007
We'll send you an email as soon as it is available!