In My Time: A Personal and Political Memoir 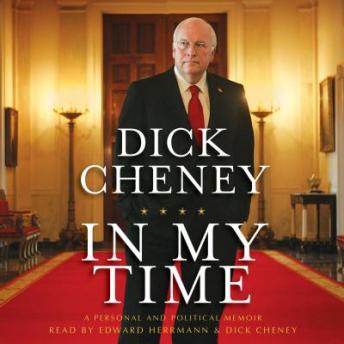 In his #1 New York Times bestseller, former Vice President Dick Cheney delivers a forty-year portrait of American politics and shares unyielding reflections on his role as one of the most steadfast and influential statesmen in the history of our country.

In his enlightening and provocative memoir—a stately page-turner with flashes of surprising humor, remarkable candor, and powerful resonance—former Vice President Dick Cheney takes readers through his experiences as family man, policymaker, businessman, and politician during years that shaped our collective history.

Eyewitness to events at the highest levels, Dick Cheney brings to life scenes from past and present: He chronicles his coming-of-age as a high school athlete in Casper, Wyoming, and courting homecoming queen Lynn Vincent, his future wife. He describes driving through the White House gates just hours after the 1974 resignation of Richard Nixon, to manage the Ford transition. He portrays his response to the national crisis of 9/11, when he conveyed orders from the White House bunker to shoot down a hijacked airliner if it would not divert. And he reveals how his political vision has endured through his extraordinary ascent to the heights of American public life as:

* Congressman from Wyoming who worked closely with President Ronald Reagan

* Secretary of defense under George H. W. Bush, overseeing the U.S. military during Operation Desert Storm and the resolution of the Cold War

* The first U.S. vice president to serve out his term of office in the twenty-first century. Working with George W. Bush from the onset of the global war on terror, he was—and remains—an outspoken proponent of taking every step necessary to defend the nation.

In My Time: A Personal and Political Memoir