In Search of a Theory of Everything: The Philosophy Behind Physics 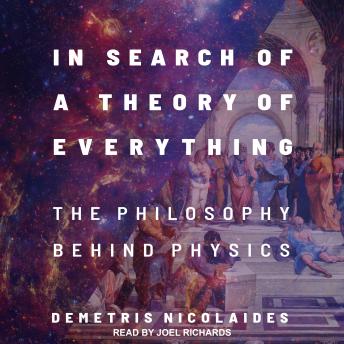 In Search of a Theory of Everything takes listeners on an adventurous journey through space and time on a quest for a unified 'theory of everything' by means of a rare and agile interplay between the natural philosophies of influential ancient Greek thinkers and the laws of modern physics. By narrating a history and a philosophy of science, theoretical physicist Demetris Nicolaides logically connects great feats of critical mind and unbridled human imagination in their ambitious quest for the theory that will ultimately explain all the phenomena of nature via a single immutable overarching law.

This comparative study of the universe tells the story of physics through philosophy, of the current via the forgotten, in a balanced way. Nicolaides begins each chapter with a relatively easier analysis of nature-one conceived by a major natural philosopher of antiquity-easing listeners gradually into the more complex views of modern physics, by intertwining finely the two, the ancient with the new. Those philosophers' rigorous scientific inquiry of the universe includes ideas that resonate with aspects of modern science, puzzles about nature that still baffle, and clever philosophical arguments that are used today to reassess competing principles of modern physics and speculate about open physics problems.

In Search of a Theory of Everything: The Philosophy Behind Physics