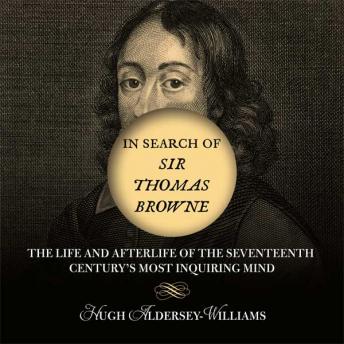 In Search of Sir Thomas Browne: The Life and Afterlife of the Seventeenth Century's Most Inquiring Mind

In an intellectual adventure akin to Sarah Bakewell's book Montaigne, How To Live, Hugh Aldersey-Williams sets off not just to tell the story of Browne's life but also champion his skeptical nature and inquiring mind for our own age. Mixing botany, etymology, medicine, and literary history, Aldersey-Williams journeys in his hero's footsteps to introduce us to witches, zealots, natural wonders, and fabulous creatures of Browne's time and ours. He reveals how Browne's preoccupations-how to disabuse the credulous of their foolish beliefs, what to make of order in natures, how to unite science and religion-are relevant today. And he shows how Sir Thomas Browne himself remains, and Stephen Greenblatt has written, 'unnervingly one of or most adventurous contemporaries.'

In Search of Sir Thomas Browne: The Life and Afterlife of the Seventeenth Century's Most Inquiring Mind