In the Company of Heroes: The True Story of Black Hawk Pilot Michael Durant and the Men Who Fought and Fell at Mogadishu 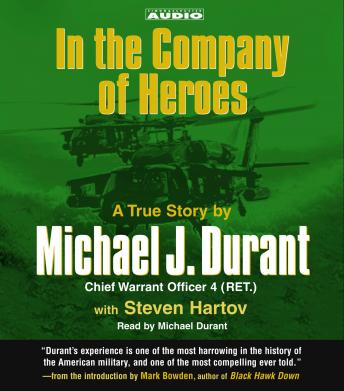 'Ranger, Ranger, you die Somalia!' shouted the enraged Somali voices surrounding Blackhawk helicopter pilot Michael J. Durant, his bird shot down by a well-placed rocket-propelled grenade. With his devastating injuries, Durant would be lucky to survive the night.
'Mike Durant...Mike Durant...' came the disembodied voice floating above the war-torn streets of Mogadishu, mixed in with the steady drone of a large U.S. Army helicopter. 'Mike Durant...We will not leave without you!'
Piloting a U.S. Army Special Operations Blackhawk, Durant was shot down and captured on October 3, 1993, in the battle depicted in Mark Bowden's bestselling book Black Hawk Down. Durant became a prisoner of Somali warlord Mohammed Aidid -- the man responsible for prolonging starvation in his country by hijacking United Nations food shipments. U.S. policy makers had determined that capturing Aidid was the only way to restore order. The simple snatch-and-grab plan, named Operation Gothic Serpent, turned into the biggest U.S. Firefight since the Vietnam War.
Durant's experience as a prisoner in Somalia grew increasingly bizarre, crystallizing a clash of cultures by turns frightening, melancholy, hilarious, and strangely familiar. Revealing never-before-told stories with the incisive thought and emotion of one who was there, In the Company of Heroes is one man's unforgettable, true story of going to hell and making it back alive.

In the Company of Heroes: The True Story of Black Hawk Pilot Michael Durant and the Men Who Fought and Fell at Mogadishu

This title is due for release on May 1, 2003
We'll send you an email as soon as it is available!