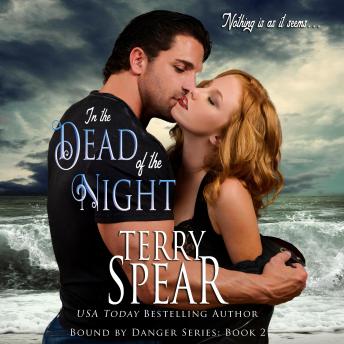 In the Dead of the Night

Allan Thompson arrives in Waco, Texas, for a mission of utmost importance - protect a terrorist's mistress from being the next victim on his hit list. But when the mission goes down wrong, Jenny Brant is nearly killed and Allan begins a new mission - protect her at all costs - as her faux-husband, until she can regain her memories.

Everything about the mission seems wrong - all starting with one Jenny Brant, who doesn't fit the profile of the kind of woman Wilson usually hooks up with. Allan and his team must protect her, but at what cost to his own sanity or his heart?

Jenny Brant begins to regain her memories. She learns she has a huge inheritance that Wilson wants to get by marrying her, and the agent Allan Thompson will marry her instead to secret her money away with the Agency's protection, but she still can't remember why she would have been a killer's main squeeze. When Wilson's thugs try to return her to him, she becomes less sure of who the good guys are and who she truly is.

The only thing she knows for certain - if someone doesn't take down Wilson, her life is forfeit.

In the Dead of the Night