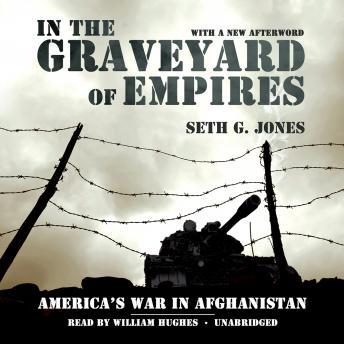 In the Graveyard of Empires: America's War in Afghanistan

This definitive account of the American experience in Afghanistan is a political history of Afghanistan in the “Age of Terror” from 2001 to 2009, exploring the fundamental tragedy of America’s longest war since Vietnam. After the swift defeat of the Taliban in 2001, American optimism has steadily evaporated in the face of mounting violence; a new “war of a thousand cuts” has brought the country to its knees. After a brief survey of the great empires in Afghanistan, Seth G. Jones examines the central question of our own war: how did an insurgency develop? Following September 11, the United States successfully overthrew the Taliban regime. It established security throughout the country, and Afghanistan finally began to emerge from more than two decades of conflict. But Jones argues that, as early as 2001, planning for the Iraq War siphoned off resources and talented personnel, undermining the gains that had been made. After eight years, the United States had pushed al-Qaeda’s headquarters about one hundred miles across the border into Pakistan.While observing the tense, often adversarial relationship between NATO allies in the Coalition, Jones introduces us to key figures on both sides of the war. Using important new research and integrating thousands of declassified government documents, Jones analyzes the insurgency from a historical and structural point of view, showing how a rising drug trade, poor security forces, and pervasive corruption undermined the Karzai government, while Americans abandoned a successful strategy, failed to provide the necessary support, and allowed a growing sanctuary for insurgents in Pakistan to catalyze the Taliban resurgence. Examining what has worked thus far—and what has not—this serious and important book underscores the challenges we face in stabilizing the country and explains where we went wrong and what we must do to avoid the disastrous fate that has befallen many of the great world powers to enter the region.

In the Graveyard of Empires: America's War in Afghanistan