In the Ruins of Empire: The Japanese Surrender and the Battle for Postwar Asia 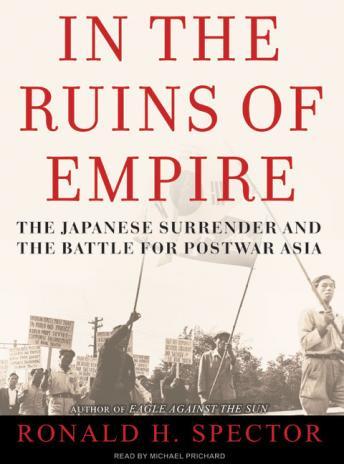 Americans are accustomed to thinking that World War II ended on August 14, 1945, when the Japanese surrendered unconditionally. Yet on the mainland of Asia, in the vast arc stretching from Manchuria to Burma, peace was a brief, fretful interlude. In some parts of Asia, such as Java and Southern Indonesia, only a few weeks passed before new fighting broke out between nationalist forces and the former colonial powers. In China, a fragile and incomplete peace lasted only a few months, and peace fared no better in Northern Indochina and Korea.

The result was years of grim and bitter struggles, during which many suffered far more greatly than they had during the war itself. In the Ruins of Empire is a sequel to the author's well-known Eagle Against the Sun. In it, Ronald Spector describes how Vietnamese farmers struggled to survive another war with the French, while U.S. soldiers and marines were amazed to find themselves sent to China and Korea instead of back to their hometowns. In the meantime, five million Japanese soldiers, farmers, and diplomats who were stranded on mainland Asia found themselves in new roles as insurgents, victims, mercenaries, and peacekeepers.

Much of the material in this book has never been published before, and it casts new and startling light on events that shook the countries of Asia. Spector examines recently released material on these events from Soviet and Chinese archives and two top secret intelligence records released by the United States, as well as newly available Japanese documents. In addition, the author chronicles the individual stories of some of the Americans who were sent in to rescue prisoners of war and to tend to the surrender and repatriation of millions of Japanese.

In the Ruins of Empire: The Japanese Surrender and the Battle for Postwar Asia