In the Valley of the Shadow: On the Foundations of Religious Belief 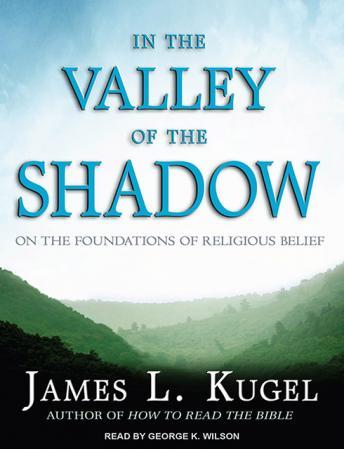 When James L. Kugel, one of the world's leading biblical scholars, was diagnosed with an aggressive, likely fatal form of cancer, he said, 'I was, of course, disturbed and worried. But the main change in my state of mind was that the background music suddenly stopped. Now I was just down to myself, one little person, sitting in the late summer sun, with only a few things left to do.' He recognized that same feeling of smallness expressed in many early religious writings, and in the months that followed, he began a journey of discovery, reexamining the most basic questions about the origins of religion and its universality, which had taken on immediate and vital importance for him.

Weaving reflections on his own struggle-the love of his family became 'as tangible as bread'-with the writings of anthropologists, neuroscientists, and poets, he leads listeners from prehistoric religious practices to the religious doubts of modern times via an amazing array of topics: the eerie starkness of medieval cathedral architecture; the 'looming Outside' revealed in African witchcraft; biblical encounters with angels; gospel album covers; and-through it all-the peculiar 'sense of smallness' that, he argues, characterizes how all humans used to conceive of themselves.

Kugel's look at the whole phenomenon of religion is rigorously honest, often funny, sometimes skeptical, but ultimately a deeply moving affirmation of faith in God. Believers and doubters alike will be struck by its combination of objective scholarship and poetic insight-a beautifully crafted consideration of life's greatest mystery.

In the Valley of the Shadow: On the Foundations of Religious Belief

This title is due for release on February 23, 2011
We'll send you an email as soon as it is available!