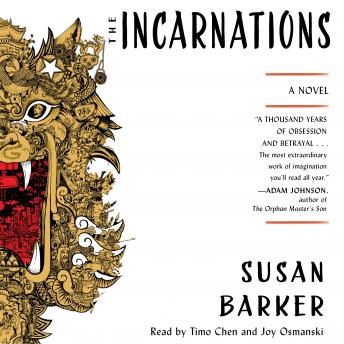 The Incarnations: A Novel

Hailed by The New York Times for its “wildly ambitious...dazzling use of language” and “mesmerizing storytelling,” The Incarnations is a “brilliant, mind-expanding, and wildly original novel” (Chris Cleave) about a Beijing taxi driver whose past incarnations over one thousand years haunt him through searing letters sent by his mysterious soulmate.

Who are you? you must be wondering. I am your soulmate, your old friend, and I have come back to this city of sixteen million in search of you.

So begins the first letter that falls into Wang’s lap as he flips down the visor in his taxi. The letters that follow are filled with the stories of Wang’s previous lives—from escaping a marriage to a spirit bride, to being a slave on the run from Genghis Khan, to living as a fisherman during the Opium Wars, and being a teenager on the Red Guard during the cultural revolution—bound to his mysterious “soulmate,” spanning one thousand years of betrayal and intrigue.

As the letters continue to appear seemingly out of thin air, Wang becomes convinced that someone is watching him—someone who claims to have known him for over a century. And with each letter, Wang feels the watcher growing closer and closer…

Seamlessly weaving Chinese folklore, history, literary classics, and the notion of reincarnation, this is a taut and gripping novel that reveals the cyclical nature of history as it hints that the past is never truly settled.