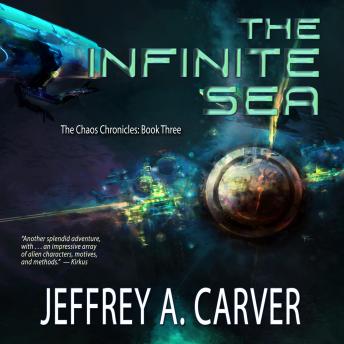 INTO AN ALIEN SEA!

John Bandicut and his company have been rewarded for their heroism in saving Shipworld. The prize: to be flung back into inhabited space—not to their home planets, as they had hoped, but to the bottom of an alien ocean. Helpless and sinking, they are rescued by strange mer-creatures and brought to an undersea city, where a race of sea-people known as the Neri live in perpetual twilight. The Neri are well adapted to their world, but their survival is in jeopardy. They face danger from a warlike surface people called the landers, from a failure of their irreplaceable deep-sea factories, and from a terrifyingly powerful entity called the Maw, stirring to life in the abyss beneath their cities.

Was the company brought here to help the Neri, as alien powers once came to the aid of Earth? What help could they, or perhaps their translator-stones, offer these imperiled sea-folk? For Bandicut, the discovery of the true nature of Maw of the Abyss is the beginning—but only the beginning—of an answer.

This undersea chapter of the immensely popular Chaos Chronicles is not to be missed! Another interstellar adventure from a master of the craft, Jeffrey A. Carver.

“An absolutely terrific book. Carver is heir apparent to Larry Niven as the king of hard SF: his stories revolve around ideas that are every bit as big as Niven’s, and his aliens are every bit as fascinating. Chaos theory says outcomes are unpredictable, but here’s one that’s a sure thing: if you start reading The Infinite Sea, you won’t be able to put it down until the very last page.” —Robert J. Sawyer